The American Conservative Union (ACU), and its signature annual event the Conservative Political Action Conference (CPAC), are heading in a more conservative direction after previous years when they drifted away from the core values of conservatism.

ACU's new chairman Matt Schlapp, new executive director Dan Schneider and other staff sat down with Breitbart News for a lengthy interview at the ACU's headquarters in downtown Washington, D.C., last week-an interview in which they walked through the themes of this year's conference. A large focus will be discussing how to apply Ronald Reagan's three legged stool of conservatism-social conservatism, national security conservatism, and fiscal conservatism-to the problems ahead. Reagan's "Peace Through Strength" doctrine, they say, applies to the entire cultural and political debate, not just in fighting off foreign enemies.

Because of those struggles in recent years, and concerted efforts by the ACU to listen to grassroots concerns about the direction of the landmark conference, the organization is now emerging as stronger, more conservative and more united.

Sen. Mike Lee (R-UT), who has been described by the Weekly Standard as the "most important Republican not running for president" because of the ideas and solutions he's pushing with his Conservative Reform Agenda, will be kicking off the conference with the first major speech on Thursday morning of that week.

"It's not an accident that he is speaking at the start of CPAC," Schneider said. "He has a comprehensive approach to conservatism that we think can launch the conference in the right direction."

It means economic strength. It means military strength. It means political influence abroad. It means cultural strength. So we are having a panel on the main stage-a discussion-with some of the most influential people in the movement who can educate attendees on what America's role in the world ought to be so we can protect our own freedoms. So from the main stage we also have breakout panels that dissect other parts of the Peace Through Strength doctrine. Because, ultimately, the conference is about combining conservative ideas with action because ideas without action might be personally interesting but not beneficial to society and action without ideas can be pointless. We're combining the ideas with the action.

All of this and more will be on display at CPAC in 2015, which will be held from Feb. 25 through Feb. 28 at the Gaylord National Resort & Convention Center in National Harbor, Maryland just outside of Washington, D.C. 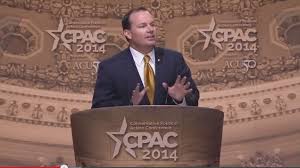