How daring. How audacious. How ahead-of-the-curve. A journalistic trail has been blazed. NOT!

Where was NR months ago when an endorsement -- however futile or meaningless --, might still have had some cache? Would Bill Buckley have waited until the GOP primary was all but over to decide to endorse a candidate? I don't think so.

So why didn't NR endorse Cruz -- who was clearly the only true conservative with any credibility in the race from the beginning -- in early January, when an endorsement might have mattered? I will tell you why.

First, the NR "brain-trust" was divided among the plethora of pseudo-conservatives and otherwise non-entities or retreads -- such as Walker, Perry, Bush, and Rubio. Some flirted with Paul. Second, they became distracted with their nonsensical -- and heretofore completely unsuccessful -- jihad against Trump. This preoccupied them for six weeks until mid-February.

Now, having failed to convince voters to not vote for Trump, and after 2 1/2 months of the primary season -- with only four candidates left standing, and let's get real folks [Spoiler Alert], only two viable candidates remain at this point --, those brave lads and lasses at NR decide to become bold and endorse the one viable candidate remaining in the race not named Trump. And I bet a few not-quite-so-brave souls said, "Shouldn't we wait until the FL primary in case Rubio wins?"

Folks -- this is what passes for journalistic bravery and integrity today among the so-called conservative media organ of record. And in a nutshell -- this is why the conservative establishment no longer has any credibility or influence in the debate today. It's a sad decline for what was once a great magazine, but it is emblematic of the deterioration of the conservative movement, such as it is. 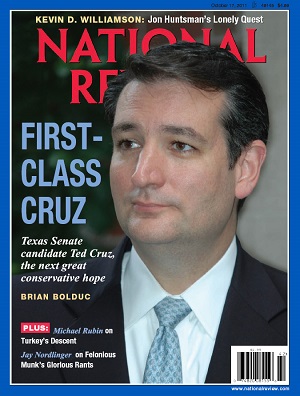