Updated April 19, 2000 12:01 a.m. ET
WASHINGTON -- The Committee to Impeach the President Again has crossed Independence Avenue and is advancing on the House of Representatives when it bumps into Lewis Uhler, an antitax lobbyist. Eugene Delgaudio shows him a letter the committee is hand-carrying to the Speaker of the House.

"Impeach Clinton again?" says Mr. Uhler. He claps Mr. Delgaudio on the shoulder. "Only you would be doing that," Mr. Uhler tells him. "It's not enough to roll him out at the end of the year and be done with it." The lobbyist lowers his voice for seriousness: "But at least there's a chance to press him on tax cuts."

"Unless we get rid of him first!" Mr. Delgaudio sings. At the Committee to Impeach the President Again -- on this morning it marshals three people -- Mr. Delgaudio's role might be described as impresario. He comes from New York City, where his father ran campaigns for Vito Battista, a pol who once expressed his view on the size of the budget by turning up at City Hall with an elephant. A 45-year-old rightist-for-life with a saintly smile, Mr. Delgaudio has spent 20 years crusading for assorted commissions, councils and committees, but always with a thing for theatrics.

With him today is Scott Lauf, who heard Mr. Delgaudio speak at George Washington University 11 years ago and became his acolyte. "The college Republicans were country clubbers," says Mr. Lauf, who grew up in Nevada. "They wouldn't make any noise." At 28, he is a tasseled-loafer Capitol Hill regular and Mr. Delgaudio's impeach-him-again point man; on this occasion, that means he gets to tote a ream or two of letters in a cardboard box.

Also along is Jack Clayton, 60, who wears a black raincoat and stares at his feet as he talks. He says, "I come from the religious right, a term I despise. Until they acknowledge the religious left, it's a disgrace." He grew up in Alabama and sounds like a courtly preacher, with a whiff of brimstone. "I have the highest respect for Gene Delgaudio," says Mr. Clayton. "He interdicts the moralistic bloviating of contemporary liberals and economic conservatives. We crossed paths and immediately saw things in common."

(Earlier in the first Impeachment) The committee (it was just the Committee to Impeach the President then) delivered a million petitions to Congress. The day the Starr report came out, its Web site absorbed 240,000 hits. 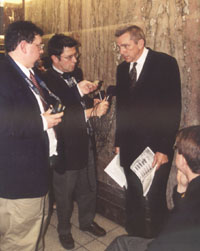 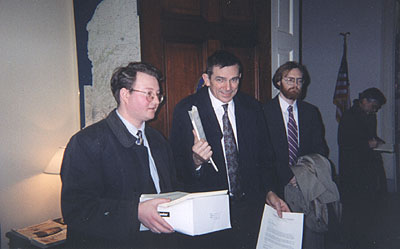