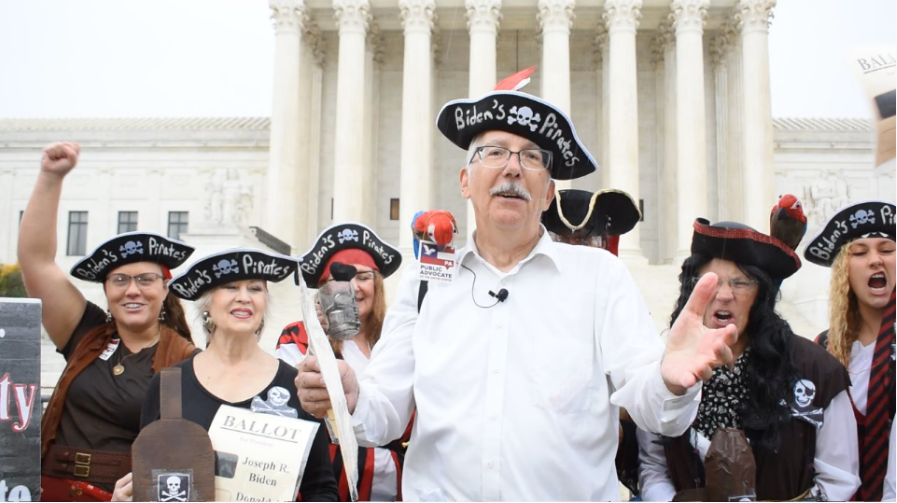 *Permission granted in advance to use with credit to Pirates for Biden, sponsored by Public Advocate*

Public Advocate president Eugene Delgaudio is sending volunteers on the road to assist with the effort to investigate voter fraud with teams of peaceful pirate performers mocking Joe Biden's willful stealing of ballots and other misdeeds in a creative political street theater production.

"I believe taking an inexpensive white chalk marker and writing two words, "Biden's Pirates" on a pirate hat, placing it on your head and singing our songs will help stop the theft by bringing attention to a criminal band loose on our nation, says Delgaudio.

This is a link to the publicly announced Public Advocate plan to oppose the Steal of the national election directly through a tour that starts with Atlanta, Georgia Friday November 20 2020 Link to Video of Pirates at the U.S. Supreme Court

Public Advocate is posting a performance video to educate and train others to perform the Pirates for Election Integrity.

Link to Pirate Songs Being Sung and distributed (plain text)

Overview of National Tour of Pirates for Election Integrity

Eugene Delgaudio, president of Public Advocate said "Our groups mission is to promote truth and we feel Trump clearly won the election and patterns in balloting irregularity clearly show Biden votes are being cast by dead people, or in a some direct or indirect fraudulent fashion, " said Delgaudio.

Regarding the description of Biden's supporters as "pirates", Delgaudio said: " Our lawyers and citizens and other honest lawyers fighting for election integrity are facing some serious threats from pro-fraud elements in the court house and in the streets of our country so these abuses give me the impression they, the Biden supporters, imagine themselves to be self-proclaimed pirates. " Whatever the vote, It's our vote instead Stuff all the boxes for Joe Vote Joe, vote Joe, a Biden vote for me