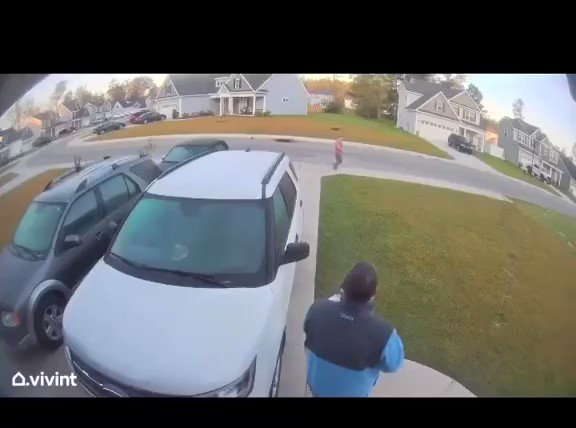 A man in a placid, sylvan, subdivision of suburbia, in this case Burgaw, North Carolina, population 3,872, near Wilmington, was saying 'good morning' to a passing jogger, and carrying a car cup and a plastic disposable plate of brownies orobably for his workplace over to his SUV. He remarks to himself that he needs to wash his car as he begins to load it. His name is Happy, his wife's name is Kristi, she's bringing out a cat carrier with a cat in it for a trip to the vet, and they are the Wades, getting ready to be off for the day.

Way off in the distance, some sort of animal darts across the street toward him at high speed and gets under one of the driveway cars.

Suddenly, there's an unearthly call-of-the-wild scream and then the man's wife screams, as some sort of creature claws and crawls up her back and seems to be after the cat, but clawing and biting her as it pursues. She screams in pain and yells to her husband to get away.

The man runs to her instead, not away, emerges, improbably holding the bobcat up like an auntie holding up a baby, and screams: "Oh my G*d, it's a bobcat! Oh my G*d," as the beast thrashes. He then flings the filthy thing about 15 feet across his yard, tossing it end over end like a rag doll, pulls out a gun, yells to the jogger, who runs back, either to gawk or help, and yells her to "get back! get back! get back!" as the bobcat darts back under the car.

Then someone, apparently off camera, seems to question him again and he yells 'it's a bobcat! It attacked my wife!' and he would "shoot the f***er."

Which it turns out, he did, before the sheriff came after a neighbor called 911 and finished the job himself.

Leftists, of course, on Twitter and beyond screamed bloody murder -- animal abuse, foolhardiness, etc -- because the man confronted and flung the bobcat instead of run and call authorities, leaving his wife to fight it in the meantime

They had little understanding of what an immediate threat the man faced, let alone the dangers it posed, or the merit of his quick actions, they just wanted the bobcat, which is the equivalent to a small lion or tiger in its power and predatory killing instinct, to feel good:

(Public Advocate note: Liberals do not have mental ability to view dozens of video of bobcats killing animals or attacking people on youtube)

But anyone watching it could see that this was a good husband, running toward danger, not from it, and protecting his wife from an obvious physical threat.

As news comes out about the disposition of things, it turns out the bobcat was indeed rabid, bit the man three times, bit the man's wife a lot, too, and bit another neighbor earlier. The creature was rabid, vicious, in pain, a hazard to the community, and had to be put down. They underwent painful rabies shots, because it clawed and bit them.

After the video drew two million viewers on Twitter (apparently Tik Tok's pampered tech princes censored it as 'violent'), he got interviewed on the local news, and responded humbly:

"I'm not happy that this happened, we don't take any pleasure that I shot the cat" Happy said. "I knew when I realized it was a bobcat, having been born and raised in Eastern North Carolina and hunting all my life, you know, that's just not normal."

It was later confirmed the Bobcat did have rabies.

"In my head, I knew it had already attacked two people. If it had attacked somebody else and I didn't do something, morally it would have bothered me for a long time," Happy said. "It was hurting my wife and I didn't want it to."

What it shows, is Americana, as one of the tweeters noted. Specifically, that's courage, self-reliance, quick thinking, not panicking, not waiting for the state, the friendliness of the suburbs, home ownership, SUV rides, gun ownership, and above all, as writer Mollie Hemingway noted -- the power of marriage and a good husband. It's everything that's not 'woke' in today's culture.

You wouldn't see a snowflake wokester doing any of this.

Give that man a medal.

FULL VIDEO- 47 SECONDS OF AN AMERICAN MAN PROTECTING HIS WIFE