Reposting same story responding to "Joe By God" and his many frequent reposting of the same articles on Public Advocate.

Joe by God is a daily pro-homosexual blog who attacks major conservative groups like Public Advocate.

He, along with other homosexual leaders, claim a Republican who is leaving the New York Senate is not really leaving the Senate due to Public Advocate and the Conservatives hounding him.

Joe and his homosexual allies of course are hallucinating wildly to cast dispersions on Public Advocate and all conservatives.

Mr. Alesi himself in a New York Times (not blog) newspaper interview gives credit to conservatives and says it is "NOT" (not) because of a lawsuit over his injury. Farewell and good riddance to a man who betrayed the Conservative Party and tradtional values he had previously promised to uphold (photo of traitor below). 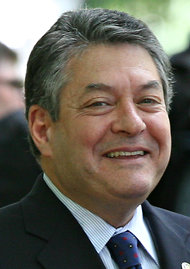 Quote "Mr. Alesi said he believed that his decision to support same-sex marriage had cost him support among some of the more conservative Republicans in his district, making him vulnerable to a primary challenge. He dismissed reports that his loss of support among some local Republican officials was prompted by a controversy that arose over his decision to file a lawsuit after falling and breaking his leg while touring a house he thought was for sale."

"The conservatives pretty much declared there would be trouble for the four senators, Mr. Alesi said, referring to himself and the three other Republican senators who supported the law. " unquote

So even though "Joe By God" and other pro-homosexual leaders are marching around claiming otherwise, last month, on May 9 when this article ran, it was a clear disaster for pro-homosexual forces.

Public Advocate posted it May 10.

So Joe By God and other pro-homosexual leaders are hallucinating and just bouncing off the walls in response to Public Advocate announcing its victory from last May 10.